Wondering which is better, Boeing vs Airbus? This post has everything you need to know!

If one day you wish to become a Boeing or Airbus pilot, check out my best-selling Pilot Training Guide on Amazon for the best flight training advice to SAVE you TIME and MONEY!

Which is better Airbus or Boeing?

In the world of civil aviation, there isn’t a rivalry that can compare with that between Boeing and Airbus. These two aviation giants have been battling for dominance of the commercial aircraft industry for over 50 years.

In the early years of jet-powered commercial aviation, it was Boeing that was the king of the industry. The company towered over the competition with its incredibly successful line of 7 series aircraft such as the 707, 727, 737 and 747.

For nearly 20 years, there wasn’t a company in the world that could compete with Boeing.  That was until Airbus introduced the highly successful A320 family of aircraft in 1988.

Ever since then Boeing and Airbus have been developing advanced aircraft with the goal of beating the other in technology, efficiency and, above all, sales to airline companies. 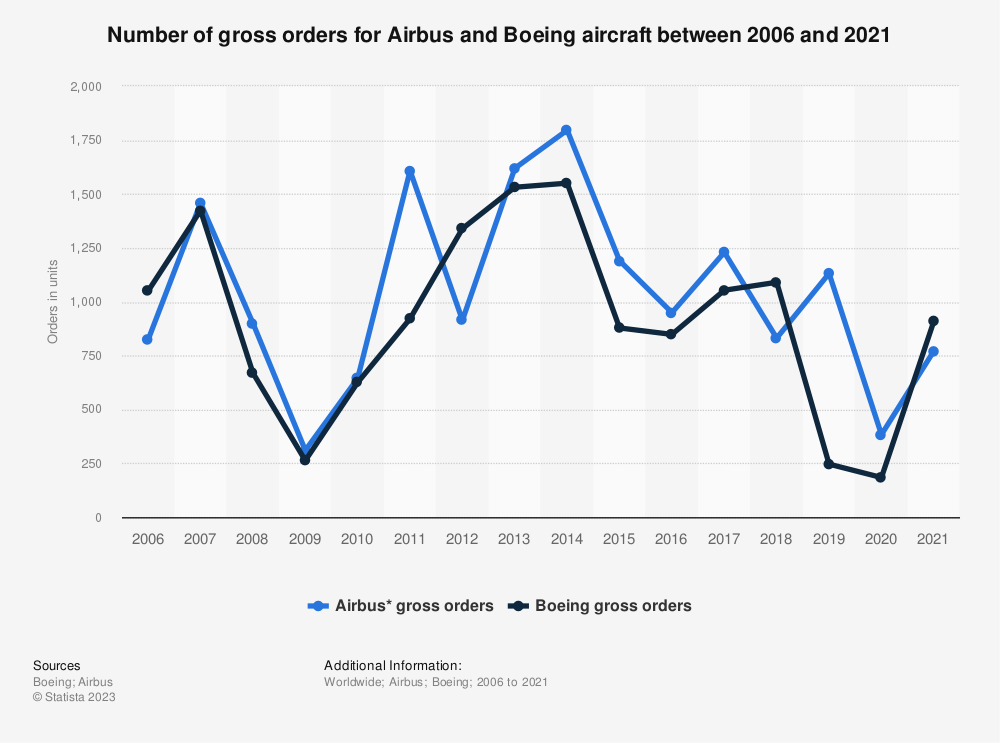 Is Airbus more comfortable than Boeing?

Both these amazing products feature on both Airbus and Boeing fleets and all things being equal, you wouldn’t necessarily notice the difference on an Airbus A35O or Boeing 777 if comparing the same product across different aircraft types.

The Boeing Company was founded on July 15, 1916 by an American aviation pioneer called William E. Boeing in Seattle, Washington, USA. The company’s first foray into aviation began with the B&W Seaplane in 1916.

As the 1910s rolled onto the 1920s and 1930s, the company continued to develop its aircraft designs into more advanced and larger all metal airframes.  As the Second World War drew closer in the mid-1930s, Boeing began to move from small single seat aircraft to large multi-engine aircraft.

This decision paid off for Boeing as the United States built 12,731 Boeing B17 Flying Fortress bombers and 3970 Boeing B29 bombers during WW2. When the jet age began in the 1950s, Boeing was eager to create a jet airliner of its own.

The aircraft they developed was the Boeing 707, first flown in 1957.

Taking advantage of the serious fatigue problems encountered by the trail blazing British built De Haviland Comet, the Boeing 707 forged a path ahead of the competition, so much so that its introduction into service in 1958 is regarded by most people as the beginning of the golden age of commercial aviation.

This era saw commercial aviation become much more accessible, faster, and cheaper for the masses, allowing passengers to travel to destinations around the world they would never have dreamed of visiting only ten years earlier.

Boeing became even more dominant in the industry when they launched the short-haul Boeing 737 and the long-haul Boeing 747.

How did Airbus start?

Airbus is a European multinational aerospace corporation that is nearly 50 years younger than Boeing, being founded on 18 December 1970 in Blagnac, France. The company began as a consortium of aviation companies formed to compete with giant American aviation companies such as Boeing and McDonnell Douglas.

Coming together to form a single company was the only way Europe could compete as a European country working alone did not have the industrial advantages the United States had such as vast resources, large factories, and a massive population.

What is the difference between Boeing and Airbus

Along with Concorde, it is one of two instantly recognisably passenger aircraft that doesn’t require the specialist knowledge of plane spotter in order to be able to identify it.

The original ‘jumbo’ jet’s upper deck gave it its distinct look that everyone knows and has come to  love. It is synonymous with the glamour of long-distance travel to exotic locations.

When it burst onto the scene in 1969 the 747 brought flying to the masses in 1969.  Suddenly, anyone could travel to an exotic destination in the world.  Joe Sutter, the chief designer and “father of the 747” had indeed come up trumps in every way possible.  It truly did bring the world together and made it a smaller place.

The 747 has a fine and enviable safety record with very few hull losses that weren’t terror related or pilot error. The aircraft’s vast size allowed it to set the world record for the largest airlift in history with 648 people successfully evacuated from Darwin in 1974. The freight version of the 747 was a massive success for Boeing because large cargo could be loaded through the nose of the aircraft.

The Boeing 707 was another successful aircraft for Boeing and another iconic aircraft. The aircraft sold very well and was used by many charter companies and flag carriers. The 707 catapulted Boeing into the lead after all De Haviland Comet’s were grounded after its three fatal crashes.  Boeing never looked back after this.

The Boeing 727 and Boeing 737 are hugely popular with airlines and passengers. Both aircraft sold extremely well with over 12,000 sales between them. The 727 had many iconic features such as the steps, or ‘airstair’ at the back of the 727 which helped to embark and disembark passengers at remote destinations, and the full span high devices.

Both aircraft were noisy in their early guises and retro fitted hush kits were mandated to deal with the problem.  The aircraft did have their issues. The two 737 crashes in the US in the mid-90s called the safety of the 737 into question.  The crashes in Colorado Springs and Pittsburgh resulted in the longest NTSB investigation in history.

Airbus has produced many successful and safe aircraft but unlike Boeing, Airbus never had the iconic profile of the Boeing series and now are all rather anodyne and difficult to distinguish at a distance for all but the most eagle-eyed aviation enthusiasts.

Only the gargantuan twin deck A380 stands out on crowded flight lines. There are no distinctive features as was the case with the 727 and 737. They just don’t have the visual appeal of airliners of the past.

One of Airbus’s most successful aircraft, the Airbus A320 got off to a bad start with the crash at Mulhouse in 1988. This was a very high-profile accident re-played on television ad nauseam.  Needless to say something of a PR disaster for Airbus.

With their unique side-stick controllers, the airbus series was a ‘hard sell’ to traditional ‘stick and rudder’ pilots who’d grown up with Boeing and McDonnel Douglas aircraft which had the traditional stick and yoke control columns.  Pilots could feel what the aircraft was doing through their hands.

Not only that, but the controls were linked so that one pilot could feel what inputs the other pilot was putting in.  With a side-stick controller one pilot’s input could be cancelled out by the other pilot’s control input, such as was a feature in the catastrophic loss of Air France 447.

This dreadful accident, in which a perfectly serviceable A 330 was allowed to fall from the sky was an absolute disaster for Airbus and Air France, the key nation behind the company. It is probably fair to say that this accident would not have happened in a Boeing aircraft.

However, side-stick issues notwithstanding, and to be fair to Airbus, the main cause behind the crash was a total absence of cockpit resource management and mishandled flight controls.  In short, pilot error.  However the accident cast a long shadow over the company.

However, it also needs to be mentioned that just because there is the widely held perception that Airbus products are bland and ‘unexciting’ doesn’t mean the aircraft aren’t successful.

The A320 is one of the most popular aircraft in the world and dominates the short haul market, especially in Europe. Around 9,971 hulls have been built as of 2021 and the company shows no signs of slowing down.

In recent years the company released the A320neo (new engine option) to make aircraft more fuel efficient and environmentally friendly.  It can also be argued that Airbus has overtaken Boeing in sales, innovation, and safety.

The two 737 max crashes and the Boeing CST-100 Starliner’s safety issues did no favours for Boeing’s reputation and sales in recent years.

Though arguments will always rage about both companies and their relative merits or otherwise, there can be no doubt that both companies have cemented their places in the pantheon of aircraft companies that have changed the way we live, work and spend our leisure, and long may they both flourish.

Do pilots prefer Boeing or Airbus?

Pilots will always differ in opinion. The general feeling is that Airbus aircraft on the narrowbodies (A320 etc) are slightly more comfortable in terms of space in the flight deck than a 737 for example.

The Boeing aircraft tend to be more of a ‘pilots’ aircraft and pilots definitely feel more connected when flying them manually. With the hydraulic and cable pulley systems on the 737 as an example, the pilot feels an integral part of the aircraft when flying manually.

The increased automation of the Airbus e.g. Airbus A320 with a rudder channel in the autopilot allows it to fly CAT 3 autoland approaches with an engine failure, so Airbus does have its benefits.

With the latest generation of Airbus and Boeing widebodies (A350, B787) all featuring fly by wire, similar performance and engines, the distinction becomes more blurred and very much becomes an individual preference.

What is the safest plane in the world?

Qantas was rated the safest airline in 2021 by Airlinerratings.com. Qantas has had an amazing safety record in the modern jet age with no fatalities in crashes.

Which do you prefer – Airbus on Boeing? Please leave a comment in the section below. We would love to hear from you!